​
The Institute for Contemporary Archeology (ICA) is an international research institute, imbedded in the Belgium M HKA (Museum of Contemporary Art Antwerp) with a digital archive. The ICA focuses on the most recent contemporary past and does field research in archives, artist studio's, public and private collections.
A Brief History: from Nul to Zero and beyond
Part 1
Dusseldorf,1958; entering a zone of poetic idealism of a monochromatic order, artists Heinz Mack and Otto Piene organized an exhibition, with around twenty informal artists, including Yves Klein, on the theme of RED. A small, self-published publication was made, in German, with the title ZERO1. Next, another second thematic exhibition and another edition ZERO2 appears. ZERO3 was published in 1961, but as the network spread, the exhibitions and publications become a large-scale event, and now the texts are also in French or English, with contributions by many international artists, It was the beginning of the internationalization of ZERO, both in the museum and commercial art world.
A few years before, in 1953, a local experimental and confidential artist group ZERO (ZERO-KAI) was founded in Japan. The main members were Saburo Murakami, Kazuo Shiraga, Atsuko Tanaka. The group was short-lived after Shozo Shimamoto asked the ZERO members to join the Gutai group founded by Jiro Yoshihara in 1954. The group organized one-day open-air exhibitions and regularly published journals from 1955 on, first in Japanese, later in English. Gutai quickly gained notoriety from its events and magazines, drawing the attention of artists and galleries around the world.
While Düsseldorf and Osaka were central, soon a new pan-European, avant-garde network of informal artist groups spread to Rotterdam, Milan, and Paris. The same year that the first ZERO magazine was published in Dusseldorf, the (a) ZERO group was founded in Rotterdam by “producer" Hans Sonnenberg. The group consisted, among others, of Jan Schoonhoven and Piero Manzoni. The following year, Piero Manzoni, together with Enrico Castellani, started the Azimuth gallery and published an international art magazine under the same name. Besides their own work, the gallery also showed their international "ZERO" colleagues. The French critic Pierre Restany published his Manifeste du Nouveau Réalisme in 1960 and founded a group with the same name. The group consisted, among others, of Yves Klein and Jean Tinguely. And Henk Peeters, started with Armando and Jan Schoonhoven the Dutch NUL group!

Part 2
1958, the year of my birth, my uncle Henk Peeters began exhibiting; I grew up with his work and that of his "ZERO" friends hanging on the walls of our family home. But it wasn’t until 2002 when I was asked by Jean Hubert Martin, at that time director of the Düsseldorf museum Kunstpalast, to make an exhibition with the ZERO artists Mack, Piene and Uecker that I realized how much I was connected to ZERO. To my surprise, most people in Düsseldorf thought that Zero consisted only of Mack, Piene and Uecker, and also in that order.
While such an assembly seemed obvious, it turned out to be impossible to get the three artists to the table to prepare an exhibition together. Out of necessity, I contacted my uncle Henk Peeters, the Dutch artist who initiated and organized the extensive and now historical Nul (ZERO) exhibitions in 1962 and 1965 at the Stedelijk Museum in Amsterdam. His archive from the sixties made it clear that ZERO was not just made up of Mack, Piene and Uecker, but that ZERO stood for an international network of experimental artists. Of course, there were the connexions with the Japanese Gutai group, the Italian Azimuth, the French Nouveaux Réalistes, but also with Duchamp, Rothko, Fontana. These artists were also accompanied by an international league of writers, scientist, industries, designers, advertising professionals etc…
Nota bene: Otto Piene later explained that ZERO was not a group, not a movement, but an attitude and that everyone could join this "group" without chairman or manifest. That is why it was decided, for the sake of clarity, to write Zero in small letters when it referred to the Dusseldorf artists, while all capital letters ZERO when refereeing to the international movement.
With the Peeters archive as a starting point, the most comprehensive ZERO exhibition thus far emerged. It would include an extensive catalogue, lectures, performances, and an opening in the presence of many international ZERO artists, including the Japanese. According to Otto Piene, the exhibition in the Kunstpalast Museum was the most important ZERO exhibition ever made. The presence of the Gutai group, while historically a propos, was not to the liking of all the artists. But the success of this endeavour brought back together the three Dusseldorf ZERO artists as beacons of the historical movement, and thus the idea arose to establish a ZERO Foundation with an archive.

Part 3
Shortly before the ZERO foundation was established, the Getty Research Institute "hijacked" the archive of Alfred Schmela from Dusseldorf. Schmela was a passionate art dealer who promoted new and innovative artists emerging in the changing social, political, and cultural landscapes in post-war Europe and the United States. He was THE most important gallery for the international ZERO movements, with exhibitions from American, German, Dutch and French ZERO. The danger that Getty would also purchase archives from ZERO artists was realistic, and this convinced the city of Dusseldorf to finance the ZERO Foundation, provided that the artists would donate their archives and works to the foundation.
This provided an important basis for the research, the publications and the exhibitions that followed. With a small team of art historians, the archive of Henk Peeters and Heinz Mack were inventoried and examined. It soon became clear that these archives were incomplete, and that a large part belonged to other artists, photographers, film companies, museums and galleries. By reaching out to experts from the ZERO countries; Japan, Italy, France, Switzerland, Holland and Belgium and bringing them together in a workgroup, the archive could be completed in a short period of time.
One of the most important discoveries was how extensive the international network of the artists was, and that they themselves had managed to build important collections of works and archival materials through artist exchanges. Through research many questions remained open, pertaining to several unknown artist names associated with the network, many images of works remained without information. Other questions of traceability came up; Information about works that were sold but never appeared in publications and information that artists were in exhibitions, but not on invitations.
The conclusion; ZERO was the largest “forgotten” international art movement after the second world war. The Guggenheim created an international workgroup was instructed to conduct deeper and accelerated research, and to take the international network as a starting point for an exhibition entitled "Countdown to the Future", in collaboration with the Stedelijk. Museum in Amsterdam. This was the start of an international revival, and the market immediately jumped on top of it.
Nota bene: I must admit, that the show at the Guggenheim would never have taken place, without the first retrospective show at the gallery Sperone Westwater in 2008. The gallery gave me carte blanche, so I could include artist from all ZERO countries, and make the first English-language survey with newly commissioned essays and many unpublished materials, as an introduction to international curators and directors.
That ZERO were not just painters, was evident from the many texts, sketches, concepts, photographs and correspondence for utopian projects. The large number of films, photos, posters and publications made it clear that Zero artists used the media to promote their ideas. The scope of the work was hard to capture, in fact, it included land art, minimal art, pop art and conceptual art, all with an optimistic and futuristic sense. With the breadth and variety of themes and artists, it turned out that it should be possible to make many different thematic exhibitions in the future. 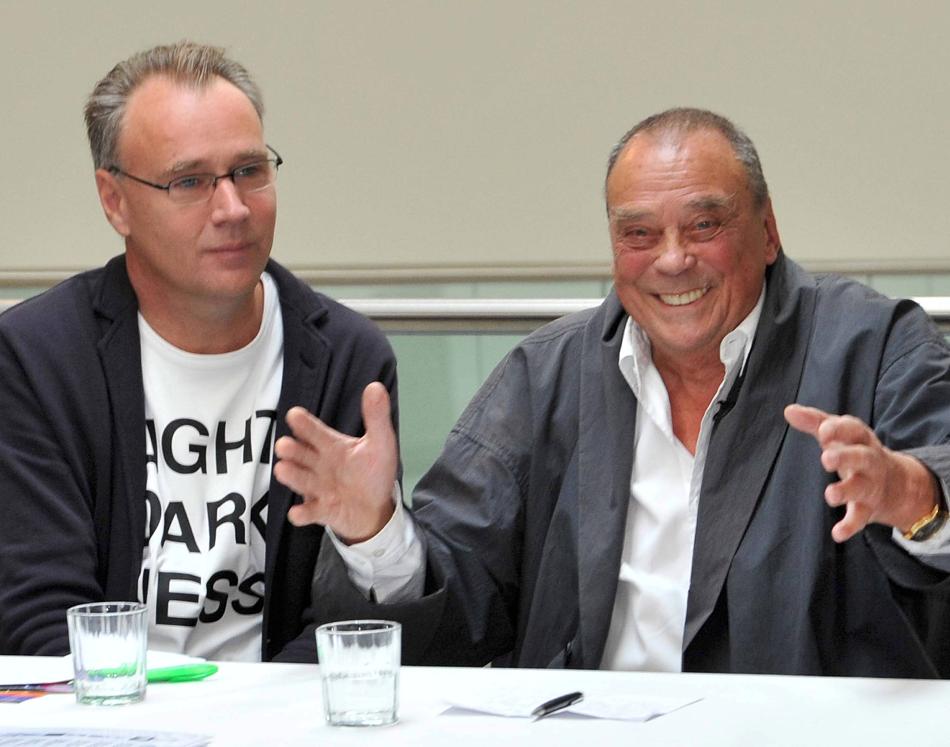 Part 4
After the recent exhibitions in New York, Amsterdam and Berlin, there was a great interest by art-historians and curators for the international network and the various artists' groups. While this was the case, the ZERO Foundation remained focused mainly on the three German members. To continue the excavation that would be needed to continue to reveal the full network of artists and their stories, I felt prompted to set up the Institute for Contemporary Archeology (ICA). This meant continuing the searching in archives, and attaching meaning to newly discovered objects… which are practices inherent to archaeology. The meaning follows from the environment where the object was found. Putting together the puzzle of the network of individual and artist groups can take years. Therefore the ICA  has  developed a web-archive to promote research and disseminate knowledge about the artist networks from the sixties. The web-archive responds to a growing need for art world professionals and academic researchers to work with artists in building information resources to aid future exhibition and re-activation of works and exhibitions. The web-archive contains exhibition photos, correspondence with artist, curators, producers, artist-statements and writings, interviews, and exhibition lists from various international art groups. The material has been "excavated" by international experts and includes documents from artist archives and  institutes from all over the world, and material found deep hidden in the world wide web. The archive is permanent under construction, as new information will be added regularly, with the focus equally on the content of these resources and the software technology used to house the information.
Click here to enter the ICA archive!
Photo: reconstructed work by Yayoi Kusama, after drawings and correspondence by  Kusama and Henk Peeters, realised for the Socle du Monde Biennale in Herning, 2017